For the last month or so I've been working on moving my blog and web presence over to www.iowagrognard.com .  Blogger has been kind to me as have all of you who have visited here, but I wanted a little more control over my layout and further content so I've moved.

I will be leaving this blog intact as it was, but I hope to see you all over at my new address someday.
By Iowa Grognard at August 24, 2018 3 comments:
Email ThisBlogThis!Share to TwitterShare to FacebookShare to Pinterest

After a catastrophe that saw the disappearance of all photos taken over the last few years, vacations and family photos included, I was looking to see what I could find.  While mucking around in different albums and such I noticed a few pieces I never posted on the blog.  These are just a few items some of you haven't seen, but have been on the workbench over the last few years. 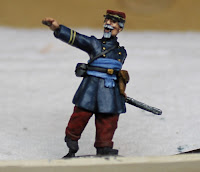 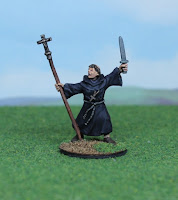 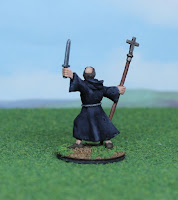 By Iowa Grognard at April 14, 2017 3 comments:
Email ThisBlogThis!Share to TwitterShare to FacebookShare to Pinterest

After a long lay off from painting, about 6 months, I've again picked up the brush.  The painting desk has been dusted, paints organized, brushes cleaned.  The only thing to do now is see if I can't get my eye and brush to coordinate.  Somewhere in the neighborhood of last week I picked a few pieces and started applying some pigment.  First victim was the "Turkish Pirate First Mate" by Eureka Miniatures.  He's shown below at a couple different stages and then completion. 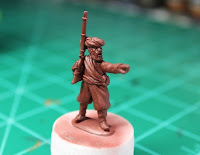 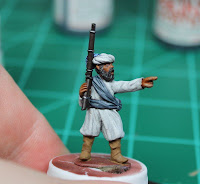 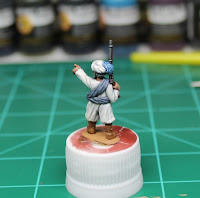 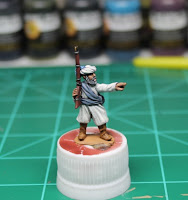 All things considered, I'm fairly pleased with the final product.  Its the first middle eastern flesh tone I've attempted in awhile so there is a satisfaction that this aspect went well.  The only problem left is the basing.  I'm not sure how I want to base him and for which game.  I may use him in Darkest Africa games or perhaps as an actual pirate...in which case I need to acquire more pirates!


By Iowa Grognard at April 10, 2017 3 comments:
Email ThisBlogThis!Share to TwitterShare to FacebookShare to Pinterest

Last year I began collecting figures for games set in Africa. These figures by Copplestone had caught my eye long ago and I knew it was only a matter of time before I'd purchase them. At around the same time I was seeing some work done by forum mate "Timmo" and knew if opportunity presented itself I'd like to commission some figures to be done by him. After talking for a bit, I remembered these hunters and within a couple messages the painting had been arranged. I waited with much anticipation and it wasn't long before he was finished with these incredible pieces. My camera does not do them justice. Its a rare thing for me to have figures painted by somebody else, but I'm glad I did and I couldn't be happier.

Basing was done by me and is not yet finished as I've yet to decide on what ground cover I want to include. It could take some time and I'd appreciate any suggestions. In the meantime I'll peruse the Lead Adventure Forum for inspiration.

By Iowa Grognard at September 28, 2015 3 comments:
Email ThisBlogThis!Share to TwitterShare to FacebookShare to Pinterest

About a month ago I traded a fellow for some Foundry Indian Mutiny figures. When the box arrived, I was elated at the contents. Not only was the fellow generous in the number of figures, but they were all in good order. I had already headed down the path to collecting Indian Mutiny figures by acquiring a number of those recently released by Iron Duke, but these miniatures cemented my plans. I went straight to work in stripping the old primer off some of the officers. The inspiration provided by opening up a box full of new figures told me I needed to get my brush on the period soon to maintain my interest. These three chaps are the result. When planning to paint these figures I knew the colors would result in a rather simple palette so I wanted to focus on execution of brushwork and trying to make the most out of the limited palette. Instead of using a single white or off-white for example I finished the hat waving gentleman with four different hues/variations of white and each of those with at least four shading and/or highlighting steps. The gentleman in the blue pants went through 4 stages of highlighting at a minimum on every piece but the sword hilt and brass on the scabbard. Overall I have to say I'm happy with both the experience of painting these as well as the finished product, which is rare territory for me. Thanks Rob! 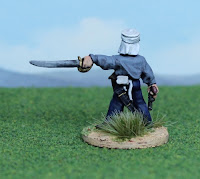 By Iowa Grognard at September 24, 2015 6 comments:
Email ThisBlogThis!Share to TwitterShare to FacebookShare to Pinterest

In the Flesh. The Foundry Expert Flesh Set

Over the years, I've led a continuous search for a favorite set of flesh tone paints. Earlier this year, after reading posts by Giles over at Tarleton's Quarter, I decided to try the Foundry Expert Flesh set. Time slipping away as it does, I only recently had the opportunity to finally use the paints I had acquired this spring. Below is a quick photo sequence following the use of the set from primed figure to final flesh stage. Hopefully this will help people see what they can expect from the set, albeit through the use of my questionable brushwork. 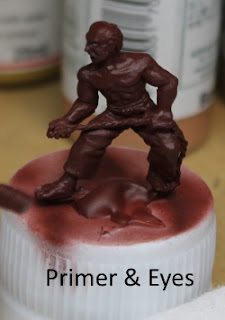 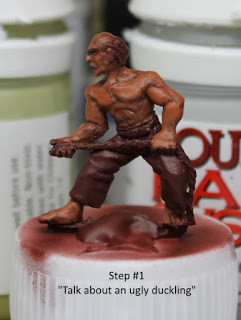 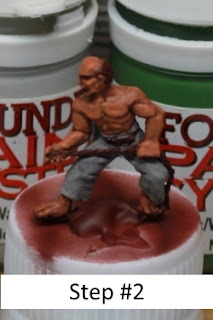 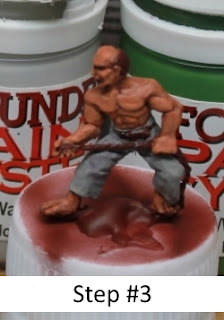 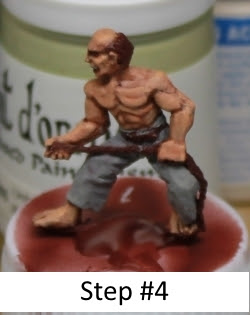 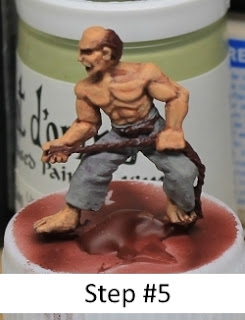 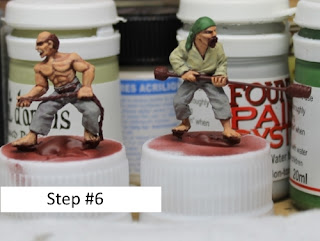 By Iowa Grognard at September 23, 2015 11 comments:
Email ThisBlogThis!Share to TwitterShare to FacebookShare to Pinterest 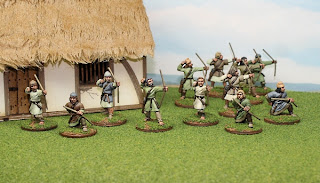 These figures were recently painted to be part of Nicole's Anglo-Saxon force for Saga. When assembling the figures, all but one of the original bows broke in half. I wasn't sure if I had just been on the receiving end of a bad batch or if this is common place so I just engineered my own by using left overs from trimmed 80mm pikes. Since these will be high traffic playing pieces, I figured it wasn't a bad idea and they turned out looking ok.

The blog entry over on "1000 Foot General" in regards to Dark Age Color Palettes was the jumping off point for the overall color scheme. I avoided adding anything fancy or even simple embroidery as to play up their role as "levies" in the game mechanics. In the end, I used a Mig Productions filter for the first time and although the results were subtle, I do think it made a difference in tying the figures together. The bases are Litko with magnetic bottoms.

The building is a simple 4Ground building as yet untouched past assembly.